Ball.Campaigns.Don't cut it out! What do you know about Delphinium Sunshine care?
Back

Don't cut it out! What do you know about Delphinium Sunshine care?

Delphiniums are originally from the cold areas of Europe and Asia but are naturally distributed in the Mediterranean and North Africa as well. This beautiful genus is made up of 510 accepted and registered species, although most of the varieties used as cut flowers come from hybrids of only 3 species (D. elatum, D. grandiflorum and Consolida ambigua, formerly known as D. ajacis).

Delphiniums are herbaceous and perennial plants. Its racemes are formed by simple or double flowers from two to three centimeters in diameter. Delphinium flowers are made up of two floral structures: petals and sepals, but they always cause a bit of confusion since the large blue floral parts, which many would call petals, are actually the sepals of the flower. The true petals are concentrated in the center of the flower imitating a bee. The color of the "bee" is variable and gives an interesting contrast to the flowers. On many occasions, a sepal elongate creating a tubular-like structure where some species store nectar, hence the name Delphinium, from the Greek "delphínion", which means "larkspur" since the sepals and the elongated structure resemble a spur.

Delphinium flowers come in a very wide range of colors but a very special feature of these species is that they generate delphinidin, a type of blue anthocyanin. Blue is a very rare color in the plant kingdom, for this reason these plants are very desirable and the vast majority of cultivable species have shades between white and blue-violet.

The Delphinium Sunshine is a spray type variety with simple flowers arranged in racemes. The flower consists of an external spiral of 5 vivid blue sepals and an internal spiral of around 5 petals that are arranged on top of the sexual organs of the flower. The petals (the "bee") are blue-violet but show a yellow and white stripe on the lower side. These stripes have pubescence, resembling the abdomen of the bee. The leaves are dark green, palmate type and are distributed alternately along the flower stem. 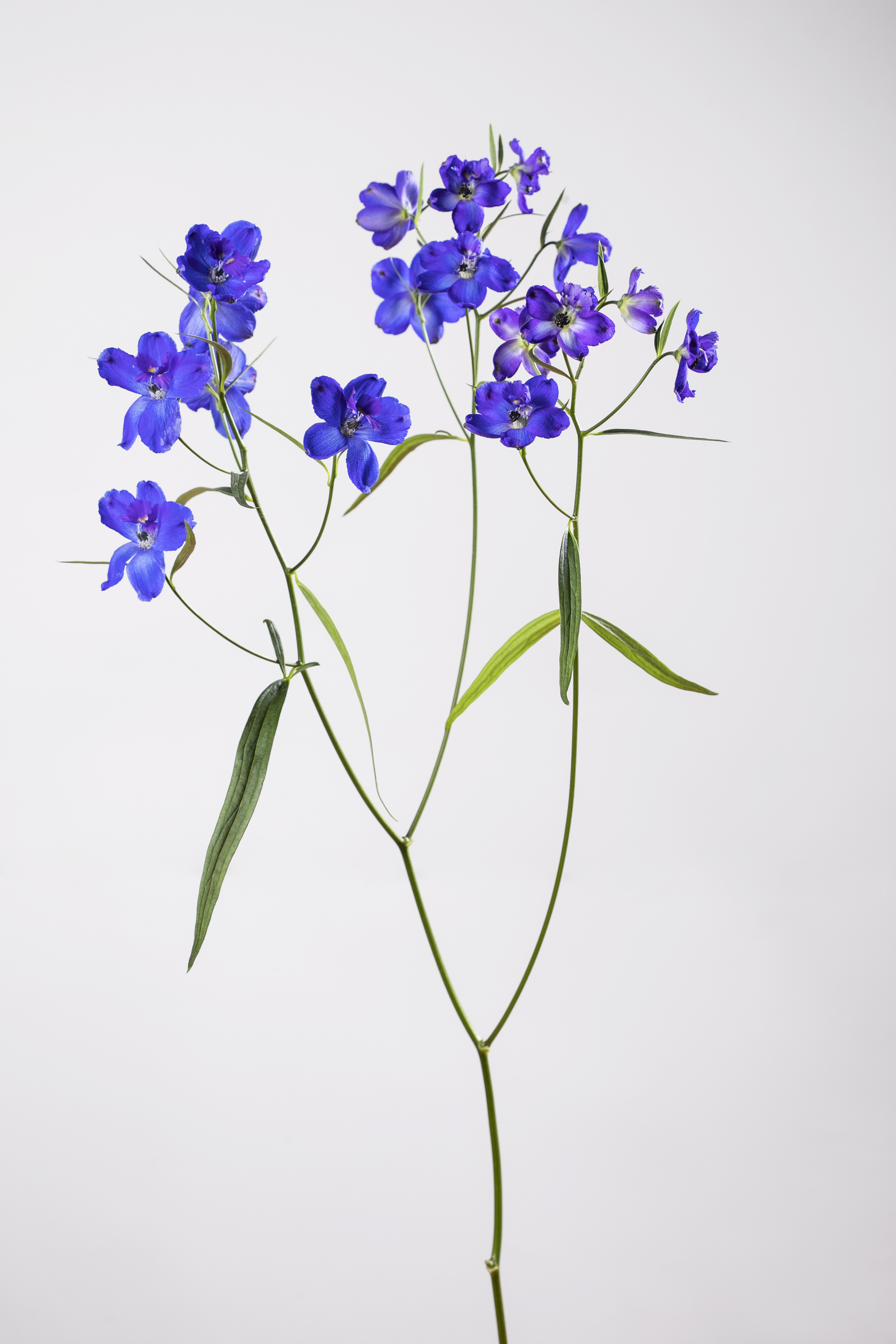 Learn how to take care of them

The Delphinium Sunshine is a resistant and high-growing plant, but it needs special care so that it can remain vigorous all year round. Here we will show you how to take care of it!

For the Delphinium Sunshine to grow upright and to harvest good quality stems, it is recommended to put some type of support on the plant, since Delphiniums tend to bend easily. An important aspect to take care of during flowering is the height of the stem at which the flower will be harvested, especially when it is necessary to clean the plant of stems that are no longer productive. If you want to maintain the plant vigor so that it generates new stems and new flowers in the following seasons, it is essential not to cut it out!

It is important that when we make the cut of the stems we have clear that this cut should not be made at ground level, this should be done, at least, above a couple of leaves, so that these leaves serves as food source for the new shoots that will come out to the plant in the next production cycle, after the buds grow we can remove the foliage that we left previously, so we would no longer have risk that our plant loses its leaf structure. Taking care of delphiniums is a very careful job and requires a lot of attention. But, of course, if you do it properly, you will be surprised with the results.

Play the video! One of our collaborators will be showing the delphinium cutting process, from the BALL SB showcase in Sesquilé.